As you may have been made aware, here and elsewhere, my great pal Stevie has undertaken, this year, to run and fundraise on behalf of Spina Bifida Hydrocephalus Scotland.

His efforts have helped raise a hugely significant amount of money and I am so grateful for every penny and note of encouragement and awareness his initiative has raised. I am also immensely proud of my great pal and just to be able to call him my great pal.

Stevie first raised the idea of running the 2017 London Marathon for the charity in 2016 but postponed this while I continued the early stages of my recovery from sepsis in hospital.

It was ironic then that illness was to upset his own preparation and ultimately cost Stevie his participation in this year’s race. He still however cheered on the participants from the roadside.

The races began on the Isle of Cumbrae where Stevie completed the 10 miles in 1 hr 13 mins 24 secs. Next up, was the 10K Men’s Run for Health through the undulating, no mean streets of Glasgow, finishing in a time of 42 mins 58 secs.

Preparing for the Isle of Islay Half marathon, Stevie picked up a calf strain, which resulted in him reluctantly pulling out of this run and the following months run on Coll. Thankfully, with both trips having been booked well In advance, he still travelled….

In September, to round off a fine year in fine style, Stevie added the SBH Scotland 10k at Cumbernauld to his years itinerary. My intention to join him in the ceremonial victory mile was not possible, due to my ongoing health concerns. It has been a blow not to have made it to the roadside for any race.

In all, a magnificent £1473.70 has been raised across the year. As I mentioned earlier, we have both been blown away by the support you, our supporters, have shown us. Not just through that tremendous sum raised but also through the tremendous warmth and encouragement you have conveyed as we have both faced up to our personal physical challenges through 2018.

SBH Scotland have already registered their appreciation to Stevie. In their message to Stevie, they impress upon the important peer support work they carry out on behalf of those affected by Spina Bifida Hydrocephalus and this sum going a long way in ensuring this crucial work continues. In the past 12 months or so, my wife and I can personally vouch for the importance of this support. It is a great community and just knowing that you are not alone and SBH Scotland is just a phone call away, is such a comfort.

Knowing Stevie, I know he will not thank me for drawing attention to his tremendous will, spirit and infectious enthusiasm for life, generally, and his contribution to the fundraising effort. He is a tremendous influence to have in your corner but most importantly for me, a true friend. 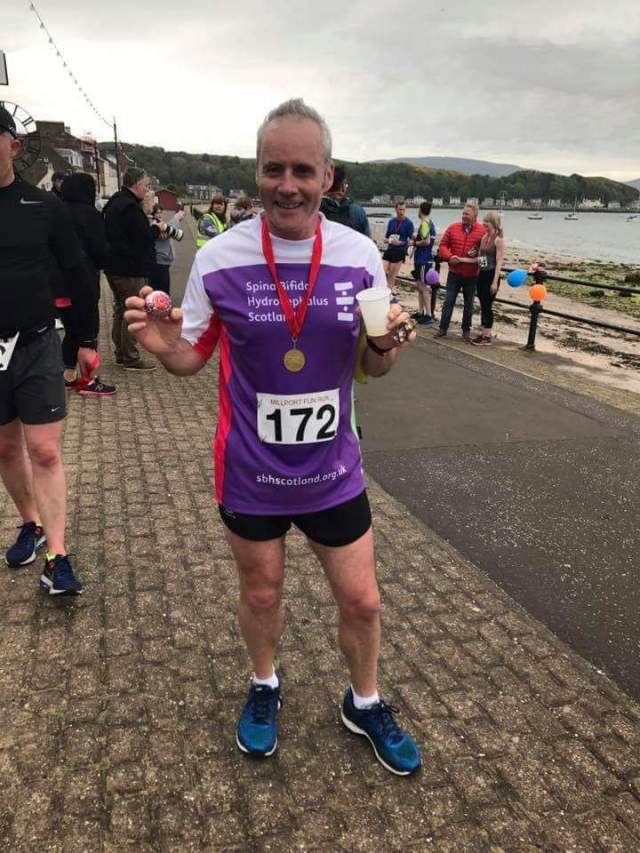 I first met Stevie in 1997. He tried to sell me books. He’s also a tremendous salesman. When I moved from my first shop in Glasgow, to Edinburgh, then Aberdeen he duly followed. He was never anything other than an infectious wee pocket rocket tour de force. Its only very recently I’ve learned Stevie suffers nerves like the rest of us.

For the near ten years I spent in bookselling, I would never know him to have a bad day. At the conclusion to our negotiations, he would always threaten to take me on that evenings run. We never did manage. I don’t know why *cough*.

During my rehabilitation from the 2007 surgery, Stevie would visit and, no matter how hard a day I had had, his patter would win the day. He witnessed my terrible attempt at carpet bowls. I think he still made attempts to sell me (and my book-loving dad) books!

Leaving hospital, and moving back to Glasgow, Stevie, along with his partner Gillian, would encourage me to embrace Glasgow, its pubs, cinema or just a coffee and a chat at the Mitchell Library. Being a schemy Southsider, they even initiated me into ways out West – Oran Mor, The Botanics, Alasdair Gray murals… Gillian would also set me on the path to making a return to work. Their influence never allowed me to feel cut off – a huge thing in aiding me gain an acceptance and helping mould my subsequent attitude towards my disability.

Since my moving to Argyll, the bond may have moved more often than not away from the city, and the Bon Accord, The Mitchell and Byres Road, but our mutual love for music, ale, drams and this beautiful country of ours, prevail.

He’s just bloody good company, a genuine good egg. To have achieved what he has, this year, running on my behalf, for my nominated charity, I have been moved to wax lyrical. I hope he won’t mind?

Everyone should have a Stevie in their life. The world would be a better place.

I support and fundraise for https://www.sbhscotland.org.uk/ @SBHScotland in the exceptional work they carry out across Scotland, in a challenging funding environment.

Throughout 2018, my friend Stevie Thomson has been running on my behalf for the charity. His considerable efforts have been met with such generous pledges and kind messages of support. The link is here

Please see these links for further info, contact details and how you can support and be assisted by this vital, donation led charity.

Thank you for reading