When I was little, I knew I had a condition called spina bifida but what it was, I was only ever told I had ‘a twisted spine’, and never having asked any more than that, while being too young to really care, my parents kept it low key, and that was OK by me. I went with the flow, it sounded exotic and i never really found out what IT was, until the condition really started to catch up with me later in life. Back in the early 1970s, all I knew was I was walking at the age of 11 months – it felt like the most natural thing in the world – and the world was my oyster. That was good enough for me. If this is spina bifida it felt as though its affect on me was no worse than the common cold.
Today, I look at my life as having 2 parts, the pre surgery part (to 2006) and the post surgery part. What doesn’t kill you makes you stronger, so the saying goes, and I can vouch that this indeed is the case. As a kid, I felt I was never up for any fight, literally, and shied away from the tough guys, gangs and conflict generally. One of the few punishment exercises I would receive in class was for ‘I must not hum the themes to popular TV sports shows in (my) Maths class.’ Mr Coyle blotting my otherwise exemplary copy book in one fell swoop, the heathen! Little did I know then the battle I was overcoming daily was a much greater battle, with my physical self.
When born with spina bifida, statistically, you really should be spending your life in a wheelchair. In the UK, neural tube defects, such as spina bifida, affect one in 1,000 babies (source British Isles Network of Congenital Anomaly Registers (Binocar), a lack of folic acid during the period of pregnancy is thought to be a main cause of spina bifida. The higher the defect (in the spinal chord) the greater the complications (my defect is at t11, around the base of the chord). Those who walk in childhood have a 20–50% chance of becoming wheelchair dependent as adults (Myelomeningocele: neglected aspects
Christopher R. J. Woodhouse). A spinal injuries consultant, not my consultant, would tell me casually and in no uncertain terms that I really shouldn’t have had a life at all, insisting the advice “nowadays” to expectant parents, on discovering spina bifida in the womb, is to “terminate the pregnancy”. How cold and I have not, thankfully, read nor saw any clinical assessment pertaining to this action since. Some ten years have passed since this ‘consultation’ and every day I survive and thrive, I flick an equally well-intentioned v-sign towards this level of uncharacteristic doom-mongering, the NHS for 40+ years have been magnificent to me.
Spina Bifida need not define who you are or what you can be. Spina bifida would have no physical affect on me until I reached my mid 30s: all that was noticeably different to me, compared to my school pals was a slight limp, some (ahem) “puppy fat” (unconnected) and a large, disproportionate head (hydrocephalus) – the publication of the official class photo was always traumatic and the film So, I Married An Axe Murderer didn’t do me or my ego many favours either (see photo)

I played football, sport mad generally, mountain biked corbetts and climbed the odd munro, fell from the odd wall, normal childhood stuff. I used to walk pretty much everywhere – my home town of Glasgow remains a thrilling place to walk/spin round. I had some more time off school than most of my friends due to hospital check ups and the odd stay, being more susceptible to infection. I was exposed regularly to the horror of needles and blood tests from a young age, none of which was ever related back to my spina bifida, to the extent that the syringe remains a phobia to this day. I can’t watch Casualty. At least this helped put my parents mind to rest that I would never be an addict.
My ability to walk gave me opportunities few with my condition would have been given, especially so in the more segregated 1970s and 80s. I used to walk to school and on my way, would be passed by the local ‘special school’ bus taking pupils to class. My naivety then made me look upon those kids as being different. My advantage over them was purely that my disability was hidden at that time. My school friends never looked upon me as ‘being different’ (to my knowledge) and there was nothing I couldn’t do (apart from ever learning to swim) which prevented me from the ignominy of being singled out. I am so grateful for my good fortune of having good friends, strong family support and the abilities having a spinal injury rarely offers those affected.
Academically, I never fully engaged with many subjects, English and Modern Studies being the exception. It was never down to my health I struggled with school, purely down to me. I really wanted to go to Art school but my Art teachers scoffed at such a prospect. Secondary school I drifted through believing that I would end up following my Dad into the railway but, during this time (under the iron fist of Thatcher as PM), my old man’s advice was that the railway “was finished”. That finished me as to having any idea of what I could seriously put my by then scatter-brained mind to.
Finishing school, I knew I loved music and movies, sports, books, reading the history of the Middle East, Billy Connolly, St Ivel Gold butter with Gammon on a roll, Beef Monster Munch, The Eagle and Roy of the Rovers, NME and Melody Maker, proper snow, BMX, writing and receiving letters, making up sending and receiving mix tapes, Cheers and CHiPs, John Peel and Andy Kershaw radio shows, model railways and Subbuteo, Panini sticker albums, new year all nighters with friends and neighbours… but how I advanced these interests into a skill, I hadn’t the foggiest! 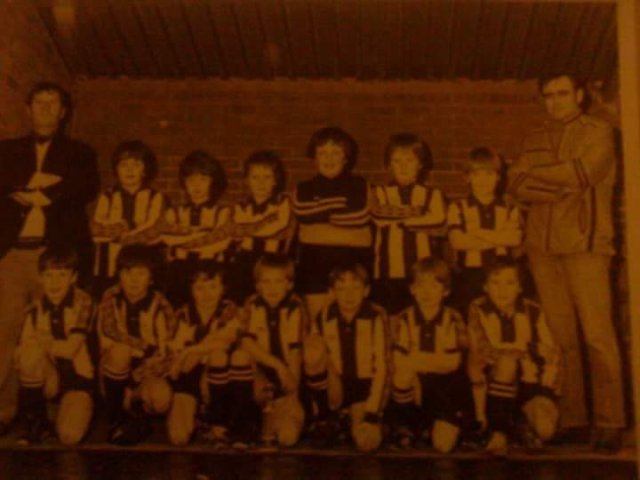 A YTS would sort me out. £27.50 each week working for a concession in Burtons was to be my underwhelming introduction to working life. I began to explore Glasgow a little more, being more regularly in the town. Missing Records, Hoi Polloi and Flip Clothing became regular lunchtime haunts. I bought books from The Softback Preview, a mail order company who would entice you with a monthly catalogue of books! That £27.50 went a long way towards feeding my increasing late teenage vanity as well as my knowledge and increasing love for reading. After a year in retail, I was offered a contract but I had an itch for unfinished business with academia, got a measly grant and, the world still being my oyster, went to Cardonald, to study Media & Communication. It was academically a bad choice as the subject range was so broad, I dismissed most of the course, but through class mates, discovered the music of James, Wedding Present and The Fall, and learned to appreciate the cinematic works of Bergmann, Hitchcock and Jarmusch and the genre of film noir, so it wasn’t a complete waste of a year.
1990 came with Glasgow celebrating its year as host city to European Capital of Culture. That year I turned 18 and culturally, Glasgow had never known anything like it, suddenly the place felt cosmopolitan and European. Suddenly locals were seen eating and drinking (legitimately) on the street on pavement cafes, this even seemed to confuse the constant rain the city is notorious for, to think twice before falling: bars and clubs had extended opening times, music, cinema, art was everywhere, the city architecture cleaned up a treat, people were confident, outgoing and no longer passing people looking down at their feet for fear of confrontation – ‘the square go’: rather than ‘wine alley’ we now had a ‘style mile’. Glasgow had well and truly cleaned up its act, a city to be intensely proud of. No Mean City spectacularly transformed itself into Glasgow’s Miles Better, Scotlands cultural capital and I lapped it all up. My increasing confidence mirrored that of the Dear Green Place. Glasgow had a greater influence on my life than spina bifida would ever have.
I have come to learn that with spina bifida nothing physically gets better with age but the life you live can be a hugely fulfilling one. I certainly feel that my experience with the condition is sympathetic to this idea. However, the life I feel privileged to live continues to extol many positives, being now in my mid 40s and having the confidence in my health and self to move on from Glasgow. Unlike my carefree childhood, things physically, perhaps inevitably, began to change in my 30s and I am now continuing to adapt to the increasing influence spina bifida has on me, to live life day to day. I face a very different set of daily challenges today and the impact of spina bifida is clear. But would I wish to change anything? Life continues to be beautiful.